Realm of the Mad God Wiki
Register
Don't have an account?
Sign In
Advertisement
in: Classes, Assassin

View source
watch 01:36
We're Getting Mutants in the MCU - The Loop
Do you like this video?
Play Sound 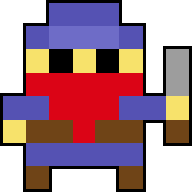 The Assassin fights from medium range and uses poison to damage his enemies over time.

On the same subject, the Assassin is also in the highest bracket for Initial Dexterity, which is shared by 5 classes in total; the Assassin, Necromancer, Wizard, Trickster and the Rogue all start with 15 Dexterity. However, the Necromancer is the only class of the 5 that doesn't have the highest Dexterity Cap, which is 75 for the other 4 classes.

In summary, any player that prioritizes movement speed and fire rate is likely to find much use out of the Assassin.

Community content is available under CC-BY-SA unless otherwise noted.
Advertisement