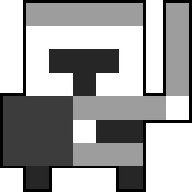 The Knight fights at close range, wears heavy armor, and uses his shield to stun and damage enemies. Using the shield deals damage and fires a cone of projectiles in front of the knight that stuns any enemies hit for 3.5 seconds, depending on the Shield it uses.

Skins: Iceman, Knights of the round

Reaching level 20 with the Knight and Priest unlocks the Paladin class.

The Knight is often considered the most powerful overall class in the game, prioritizing Max HP, Vitality and Defense. For this reason, the Knight is able to soak up damage, yet still deal plenty, in a way that no other class can.

The Knight starts in the highest HP bracket, along with the Warrior and Paladin, at 200. The 3 classes also end with a Max HP Cap of 770, higher than the other classes.

Finally, the Knight has the highest Defense Cap, by a significant margin. At a cap of 40, the Knight is only one of two classes that have an abnormal Defense cap. the other being the Paladin at 30 (all others cap at 25).

Community content is available under CC-BY-SA unless otherwise noted.
Advertisement